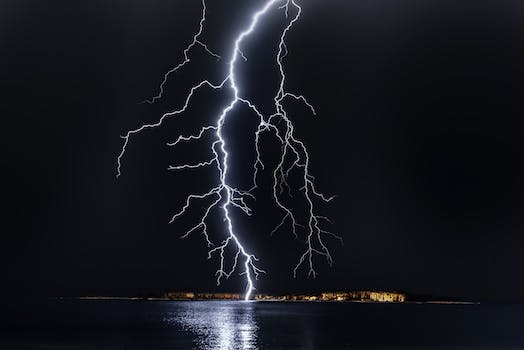 As we enter mid-spring and the weather finally starts to warm up a bit, we expect to see quite a few thunderstorms in Oregon. Inspiring awe in certain while scaring the trousers off others (although not ME, I’m definitely not scared of lightning. No sir,) it is no surprise that cultures all over the world associate lightning with deity. But what precisely is it?

During an electrical storm, the upper portion of the storm clouds has a positive charge and the lower part has a negative charge. It’s not quite clear how the clouds reach these charges in the first place, but one theory is that different forms of liquid (vapor, water and ice droplets) collide as they rise and fall inside a cloud. In the crash, electrons are knocked off of the rising moisture and they gather at the bottom of the cloud, creating the negative charge. It is believed that rising moisture then carries a positive charge to the top of the cloud. The charge separation within the cloud is what generates an electrical field, the strength of which can be linked to the quantity of charge buildup in the cloud.

When the electric charge within the cloud becomes quite strong, the air becomes ionized (the positive ions and electrons are spaced further apart than before and the electrons can move more freely.) The strong ionization causes the air to begin to break down, allowing for currents to flow in an attempt to neutralize the charge. These currents are called leaders, and they provide a path through the cloud for the lightning to follow. The first (or stepped) leader doesn’t move easily, but jumps in a jagged fashion. Many leaders form at the same time, but the first one to make contact with the floor is the one which gets the lightning.

The entire process is somewhat more complicated, but there you have the fundamentals of how lightning is formed. Lightning is much too powerful for even the best of surge protectors to protect against, and it can reach temperatures of 54,000 °F. An average bolt of lightning carries about 30,000 amps.

Lightning is a complex phenomenon with many variations and exceptions. Sometimes it shows up in the most unexpected of places.

For example, do you know:

Why We See Lightning During Volcanic Eruptions?

If you saw photos of the eruption of Icelandic volcano Eyjafjallajökull that erupted in 2010, you may have seen lightning over the plumes of smoke and thought that they definitely need to be photoshopped. Not so!

There is still research being conducted to the definitive cause behind lightning within the smoke plumes of volcanoes, but the general consensus involves, of all things, dust. The idea is that dust/smoke/ash particles take small charges which become amplified during the chaos of rushing out of a volcano. With every collision of one particle with a different one, the charges become more and more polarized until lightning is unavoidable because the polarization becomes too great for the atmosphere to withstand the flow of electricity. The lightning neutralizes the charge separation, essentially relieving the strain of polarization.

There’s another lesser known sort of volcanic lightning, however, which happens right at the mouth of the volcano and is significantly less orderly (not the normal branching, bolting lightning we’re used to seeing), manifesting as chaotic sparks probably as the result of a hefty charge inside the volcano itself.

How Many Different Types of Lightning You will find?

The answer to this question depends on who you ask, and what you think about a”type” of lightning. The typical classifications are as follows:

Cloud-to-ground (Less common but more dangerous than cloud to cloud. If anything on the ground is struck by lightning, it was cloud-to-ground.) Cloud-to-ground lightning is more complicated than a simple bolt shooting directly from a cloud, however, and includes charges moving up and down from both the cloud and the ground.

Cloud-to-sky (Also known as sprites, cloud-to-sky lightning occurs in the upper atmosphere. They lack the hot temperatures of other types of lightning, and normally have a reddish-orange hue.)

Ribbon lightning (Successive strokes of lightning are displaced by wind, leading to a broadened appearance, almost like a double-exposed photograph ).

Bead lightning (The corrosion of the luminosity of the bolt of lightning, resulting in a beaded appearance. This happens very quickly and is hard to capture.)

St. Elmo’s Fire this isn’t actually lightning, but often closely associated with it and seen during electrical storms. St. Elmo’s Fire (not to be confused with ball lightning as it frequently is) is the result of a gap in electrical charge. It’s made of plasma (ionized atmosphere that emits a glow) and, while lightning is the movement of electricity from a charged point, St. Elmo’s Fire is a coronal discharge that sparks up at the area where there is a drastic difference in charge between the air and an object like the mast of a boat or the steeple of a church. St. Elmo’s Fire is exactly the same thing that occurs in a fluorescent tube- basically a continuous spark, glowing blue because of the particular combination of air molecules. It may also choose a purple hue.

St. Elmo’s Fire is very tricky to locate accurate images or videos of. Many videos exist which claim to be St. Elmo’s Fire but are actually just static discharge (a frequent phenomenon around planes in the midst of storms). A simple way to tell the difference is that St. Elmo’s Fire doesn’t look like lightning- rather it emits a steady glow.

Ball lightning- The most mysterious sort of”lightning”, there is some dispute among scientists as to whether ball lightning really exists. Arc faults along power lines (which appear as large, impossibly bright balls of light) and photographic anomalies are both to blame for the confusion.

Lightning regularly strikes water, so never go swimming or boating during a storm. If you are in the water when a storm begins, get out of the water as quickly as possible.
Lightning strikes will follow anything that conducts electricity, so stay off your landline phone in a storm and turn off/unplug your computers. If lightning strikes your property, even the strongest of surge protectors will have a hard time protecting your equipment. (Radio waves don’t conduct electricity, so as long as your mobile phone isn’t plugged into an outlet and you’re not standing outside during the storm with the metallic device held to your face, it is safe to use it. They do not strangely”attract” lightning more than any other object with metal inside ).
Lightning does in fact strike twice (the Empire State building is struck 20-25 times per year), so don’t rely on old adages to your security information.
If you are caught in a thunderstorm and cannot get inside to safety, crouch low to the ground but don’t lay flat. Try to maintain as much of your body from touching the ground as you can, because you’re in more danger of being injured by currents traveling across the floor after a lightning strike than of being spilled directly by a bolt.
A flash-to-bang (seeing lightning to hearing thunder) ratio of 5 minutes equals one mile of distance from the lightning. Ten seconds equals two miles, etc..
Lightning in Mythology

One has only to see an electrical storm themselves to comprehend why so many individuals have associated lightning and thunder with deity. A few popular legends and myths about lightning:

The Thunderbird common to North American indigenous cultures is thought to make thunder from the beating of its wings, and lightning is created by glowing snakes that it carries or directly from its eyes.
There is so much more to learn about lightning in all of its various incarnations. It’s a stark reminder of the incredible powerful forces of nature that surround us on all sides. Despite how much we learn about it on a scientific level, we may always be inclined to associate this incredible force with deity.