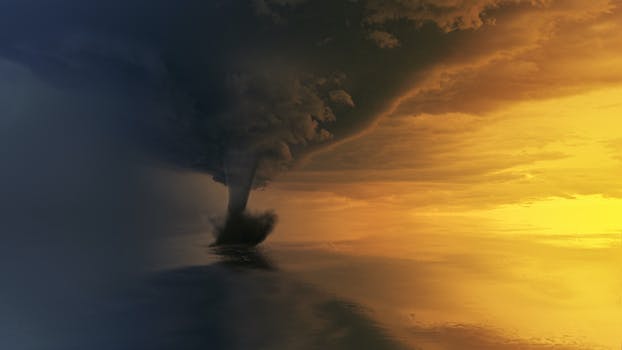 When a tornado touches down near you, will you be prepared?

Although tornadoes tend to keep east of the Rocky Mountains, they have also happened in pretty much every state. To put it differently, you might be affected no matter where you live. This means that tornadoes should be on everybody’s list as something to be ready for.

When I think of tornadoes, my initial thought is a funnel cloud hurling cows through the atmosphere. I have never been around a real tornado, however, the film Twister definitely prepared me for flying bovine if I ever find myself near one.

And then, after the image of the cow flies off into the sunset, I ask myself,”What do I really know about tornadoes, and how will I know if one is coming?”

As tornadoes tend to begin showing up more prevalently in the spring (and spring has just about sprung), allow me to share with you the way to know if a tornado is on its way for a visit.

Needless to say, the simplest method is to have your TV or radio on. Your regional broadcasters will broadcast a tornado warning (right in the middle of your favorite series, might I add). Those tend to come only about 13 minutes before the real tornado, and may actually arrive much faster. That being said, not every area will receive a broadcast warning, so knowing the signs of an impending tornado is very important.

Although tornadoes can be enormous and devastating, they at least have the decency to give us a few warning signs before they officially arrive. These six signs should help you identify tornado threats.

A Rotating, funnel shaped cloud extending from a thunderstorm towards the ground.

Alright, so this one is one of the more obvious ones. Tornadoes have to form somewhere, so in case you find a funnel cloud start to form, this is a very good indication a tornado is on its way. When the weather gets tough, you might want to keep your eye on the skies, just in case.

Not to be confused with the aurora borealis (aka the Northern lights). This is another reason why it’s good to see the heavens during storms. There is a good deal of hail in thunderstorms associated with tornadoes, and so as this hail begins to be whipped around, the light of the sun refracts off the hail, giving the sky a green tint. The sky isn’t always green, however, so don’t be fooled if the sky is simply very, very dim.

An approaching cloud of debris

Sometimes the funnel of a tornado will not be visible. Yet. By detecting a cloud of debris approaching (especially at ground level), that can be a good sign that something even more dangerous is on its way.

A loud roar (similar to a freight train)

This is particularly helpful when you do not live near a railroad. Tornadoes give off a continuous rumble, much like that of a train.

A strange calm after a thunderstorm

It’s not unusual for a tornado to occur after a thunderstorm. Don’t be surprised if you see a clear, calm skies in the tornado’s wake.

Debris falling from the sky

This is also a good indicator that there are strong winds nearby. If debris starts falling from the sky like rain, chances are you will want to find cover.

Are you prepared for a tornado’s devastation?

So there you have it. If you keep those six things in mind before and during storms, you should not be caught off guard by a tornado.