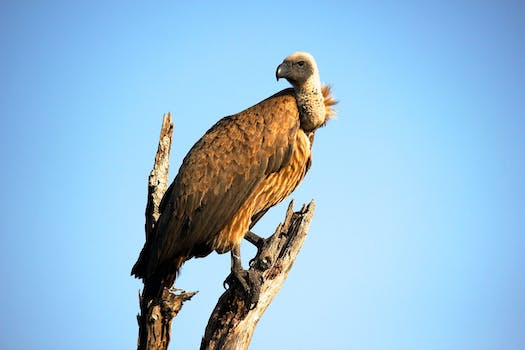 When I was a young girl, many, many years back, my Mother and I often picked wild strawberries as a special summer treat for that night’s dessert. On one occasion, as I bent down to loosen a bunch of sweet little red berries from their stemsout of the corner of my eye something caught my attention. I looked beyond our neighbor’s house, and into the sky above’Sugar Hill’, where I had enjoyed watching so many awesomely beautiful sunsets. A large dark bird with an impressive wingspan was moving quietly and slowly, circling in the skies over the mountain.

“What IS that, Mom?” My mother stopped picking berries and stood upright, shading her eyes from the bright sun. “Oh”, she said with a positive note,”that is a turkey vulture riding a thermal.”

Gentle, caring and devoted parents
Don’t spread any diseases at all, contrary to popular beliefs
Crucial part of Nature’s cleanup crew
Perform removal of carcasses before they can become diseased
Purify environment by eliminating animal cadavers that are already infected
Considered sacred in certain cultures for their gift of sanitizing
Enjoy soaring on high with hot thermals to lift them upward
Resemble wild turkeys with their red featherless head, dark body and two-tone wings
Lazy, dirty, aggressive, morbid harbingers of death? While those are clear responses, I fear they’re based on images conjured up by Hollywood Westerns.

The black vultures most often seen in the west and south throughout Mexico are indeed aggressive.

Common all over the United States, it is the turkey vulture which uses its highly developed capacity to detect the stench of cadavers, even at great distances. These large eagle-sized birds game distinctive two-toned wings that are dark brown, with silvery grey feathers on their wing borders.

Turkey vulture heads are small and featherless for a very good reason. Think about it–much like workmen dress for the job, these birds do the opposite. They undress (their heads) for the job at hand. If their noggins had feathers, they would get all gummed up when they dove into carcasses. It is not pretty, but it’s true. Vultures would be spending far too much of their time preening and cleaning instead of filling their bellies. The smaller head size allows them to get into all the nooks and crannies where the meat is. In the bird world, efficiency most often translates into survival.

When the young hatch out of their excellently camouflaged eggs, they are powerless to defend or feed themselves. Their parents are aware for possible predatory attacks, and they are adept at providing plenty of food for their downy chicks for another 60 to 80 days.

In some cultures they’re revered as purifiers and cleansers. Buddhists think they have the ability to release the soul and take it to Heaven. So it is a routine practice to provide their dead to vultures for’cleansing’ and delivery to the firmament, also known as’sky burials’.

Their scientific name, Cathartes aura, actually translates to ‘purifying breeze’ or’golden purifier’. Either of those interpretations is more accurate than the term’vulture’, which means to tear.

Turkey Vultures are gentle creatures, despite their ghoulish reputations. They’ll take turns, rather than fight over bits and pieces of flesh. Other birds, such as the black vultures and hawks, find it easy to push them away from their own finds.

Possessing excellent immune systems keeps them from contracting any nasty diseases from the dead creatures they ingest. When roosting on the floor or atop a dead tree stump, they spread their wings outward with their backs to the sun to help rid them of parasites contracted by their food resources.

If they feel afraid or threatened they regurgitate (often at the direction of the perceived threat). This offensive act repels, and takes their attacker by surprise, with the sight and odor that is horrible. Additionally, it serves to lighten the load for a faster get away!

The unfounded fears that turkey vultures spread disease often prompts intentional shootings and cruel poisonings and trappings. But these birds keep the environment clean and disease free, as opposed to the reverse.

The much maligned Turkey Vulture serves a noble purpose. We need to look beyond the superficial idea of attractiveness, and give the Turkey Vulture the reverence it has rightfully earned and deserves.